Khumbu Pasanglhamu Rural Municipality itself is composed of  words Khumbu and  Pasanglhamu, Khumbu means uppermost part of district and Pasanglhamu is the name of first woman summitter of the Mt.Everest(highest mountain above sea level). It was nominated to cover the remembrance of brave summitter Pasanglhamu Sherpa and  the world's highest peak(Mt.Everest) in the Khumbu region, is 8848 m high. It is also known as the third pole of the world and the top of the world. There are many peaks around the Everest and in the Himalayan Range Lhotse, Nupse, Chuyu, Maidabalam, Pumori, Thamserku, etc. This is the world-renowned Khumbu Icefall. Tourists from all over the world visit the Khumbu region for trekking to see the spectacular Himalayan panoramic views of the area. Kharikhola, Lukla, Phakding, Manju, Namche, Khumjung, Khunde, Tengboche, Forche, Pangboche, Firiche, Dingboche, Thame, Gokyo, Labuche, Gorkhep, etc. are the main settlements of this area. Lukla Airport(Tenzing-Hillary Airport (LUA)) is one of the top airports in the world and also known as the gateway to the Namche  and Mt.Everest. Most of the Sherpa tribes live in this area, with the language associated with Sherpa being the identity of Sanskrit Buddhists. The important monasteries, including the Tengboche Monastery, the Pangboche Monastery, the Rimijung Monastery, the Khairkhola Monastery, are the tower of faith. The tourist destinations are in the Himalayas in the Hieroglyphs, ascending and trekking the mountains. The Everest base camp, including Kalapathar, becomes the destination of most.

In the restructuring of the state with the promulgation of the constitution of Nepal, the whole of Chaurihark, Namche and Khumjung VDCs of Sawik under the Solukhumbu district of the province-९ and ward no. 1, 5, 6 and 9 of the Juving VDC were indexed in Khumbu Pasangalhamu Municipality. It borders Sankhuwasabha district to the east and Mahakullung township to this district, Ramechhap to the west, Dolakha district and Tibet t, to the north of China, and to the south, Soluhudhkund municipality, Dudhakosi and Sotang. There are 5 ward offices [ ward no 1 Kharikhola, ward no 2 lukla, ward no 3 nachipang and ward no 4 khumjung and ward no 5  Namche].Rural Municipality office is presently located near Chaurihark . The area of ​​this village is 1539.11 sq km. It has become the second largest village based on the area of ​​the province. According to the census of its population, the population is 8989. Sagarmatha National Park is nominated by the name of Sagarmatha, which is found in most of the Himalayan region and the forests, flora, fauna and animals found in the Himalayan climate. This park is so important that  it is listed in the world resources listing. Therefore, Khumbu Pasangalhamu Rural Municipality has been a very important Part of Nepal. 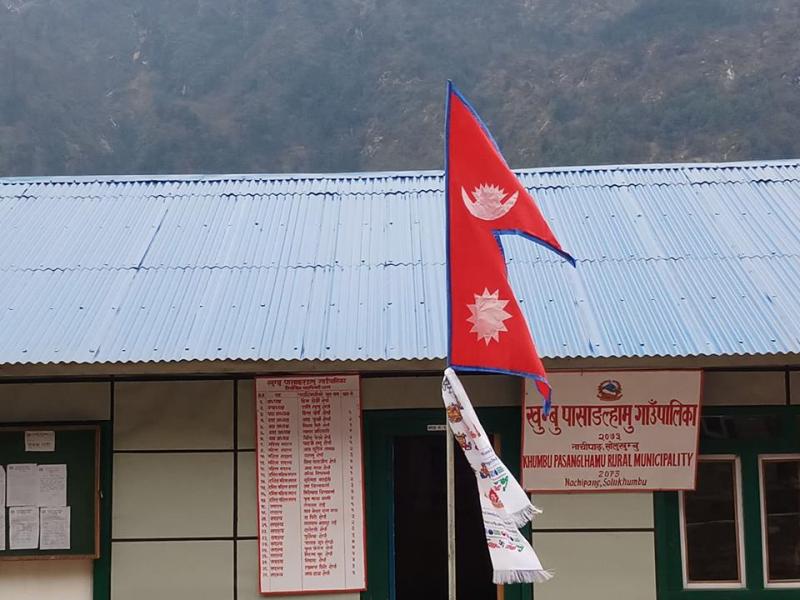